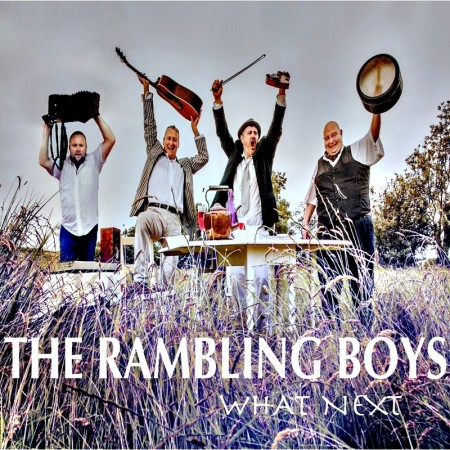 An all-star quartet alright, with members of Afterhours, Toss the Feathers, 4 Men and a Dog, and the Accordion Samurai, this new band is old indeed in individual experience. With an even split of songs and tunes, What Next is much more vocal-heavy than most CDs I review, but it’s worth it – for two reasons. Firstly, the songs are actually pretty good. And secondly, the instrumentals are outstanding.
Alan Burke sings a range of numbers from the almost contemporary to the firmly traditional. Pretty Fair Maid is a stateside variant of the English love token ballad, but you can’t deny the energy and drive in this arrangement. Will Jobling is a gruesome Durham mining tale, pulling no punches, not for the faint-hearted. The band’s namesake track is a Planxty classic, expertly delivered, and followed up with two well-known songs in Irish. Alan also sings his own If Mama Ain’t Happy, close to contemporary country. The arrangements by Gino Lupari, Sean Regan Alan Burke and David Munnelly are fresh and engaging, with strong backing vocals which wisely exclude the bullet from Belmullet.
All five instrumental tracks are original compositions, shared by Munnelly and Regan, and they range from funky reels to a romantic waltz. Grange Road is a thumping set of fast-paced four-fours, rollicking rather than rambling. The album title track starts slow and builds into a Balkan horo, not one of the usual ones, with delicate box and fiddle, and world-class clapping from Gino. Dave leads Voor Roos, a lovely melody which could mean many things but I’m guessing it’s Dutch for “For Rose”. Wosky’s is a fiddle showcase, with a strong box bass line, and What Next finishes with another pair of reels tightly played with rhythmic guitar and bodhrán behind the box and fiddle. Give it a listen online – I reckon you’ll be hooked.