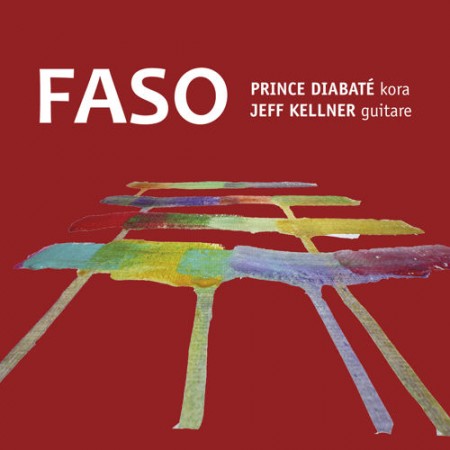 With the release of Faso, Prince Diabate of Guinea has once again affirmed that the musical explorations of the West African kora masters often prove to be most satisfying. With his musicianship and cultural expression deeply rooted in the traditions of the Malinke people, Prince Diabate leads us through a set of both traditional and pop compositions that flawlessly embodies the same spirit of musical adventure that can be found in the best works by fellow griot/virtuosi kora players from around West Africa with family names like Cissokho, Diawara, Konte and, of course, Diabate

In collaboration with seasoned guitarist Jeff Kellner (who’s resume includes stints with Mali’s Salif Keita and the seminal Senegalese acoustic group Toure Kunda), Prince Diabate delivers a pleasing collection of music that continues his three decades-long foray into deceptively simple, laid back presentation of considerably experimental music. Every cut features his particular brand of kora playing that enjoys a percussive approach that he attributes in part to his love of Jimi Hendrix. Equally enjoyable and, in fact, one of the highlights of the music is his solo voice which is often delivered in a lilting, almost whispering manner

Roughly half of the compositions on Faso are purely traditional in vocals and acoustic in instrumentation. Most of these pieces are so strong in their melodic presence that they stand firmly alongside any of the more pop explorations also found on the album. Of course, when listening to these ventures into pop, one is immediately impressed with guitarist Jeff Kellner’s ability to express himself in phrasings that recall the sounds of a wide range of influences including Malian guitarists Samba Toure and the late Ali Farke Toure as well as, on one piece, the guitar work from the Tuareg groups of northern Mali. All the while, though, Prince Diabate manages to blend the various elements and instruments into a sound that feels completely natural and relaxed.

The ringing, percussive beauty of the 21-stringed kora may very well be the most versatile of all the sounds to come out of the African continent. Finding itself at home with every style of music ranging from the most traditional expressions of West Africa all the way to the most collaborative ventures involving western jazz, blues, reggae and more, the kora is capable of floating high above it all with a lightness that one might be tempted to describe as spiritual. Prince Diabate has certainly reached these heights on Faso, and based on the fact that each of his album releases has topped the previous, Faso promises continued pleasure for all of us.