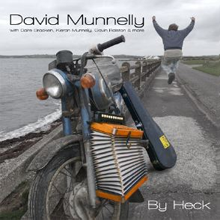 Mayo box player, David Munnelly has a new album out, By Heck! His regular group joins a list of guests and offers an album of real variety and depth. Playing a Franz VanderAa accordion made in Holland, David gets all there is to get from the double row configuration, tuned to C#/D. On offer are 11sets of tunes, with three songs added by regular vocalist, Andrew Murray and guest, Helen Flaherty. Reels, polkas, barndances, airs, jigs and hornpipes ensure the variety. Well arranged tunes dip, slide and change with a real sense of creativity. Often, the group achieves a sound and ambiance that is like no one else. This is a young group with fresh takes on the tradition, while remaining true to the bone. Munnelly is one of the best button box players to come out in years. Technique and speed are leavened by soul and a deep understanding of the heart of the tunes. David’s brother, Kieran, plays the bodhran and a flute bordering on the South Sligo style, Daire Bracken offers some wondrous fiddle work, and Gavin Ralston is featured on a really solid rhythm guitar. This is a truly exciting new group on the scene. The energy of youth meets real ability. Highly recommended, Munnelly’s is a career to follow closely. Great show in person. Big talent. Big time.

Here’s an album that’ll get your attention at first listen. Melodeon and accordion (and piano) player Munnelly wears his heart on his sleeve and his heart lies in the music of “the golden age”, when exuberance and a lack of cynicism combined to add an edge to Irish music which is often lacking in the more clinical and more cynical playing encountered today. Munnelly has no time for po-faced restraint; like a man possessed, he trots out a gleeful, purposeful intro, then tears into “The Cuckoo’s Nest” with such pace and vigour that the listener’s left gasping and wondering how he managed to fit so many intricate ornaments and curlicues into the tunes while maintaining such a uncomprising tempo and rhythm, so much so that the change to “The Silver Spire” comes as a shock – a further subtle build-up of energy and foot-tapping fun. And then Munnelly’s guru gets a nod as the rhythm shifts and Munnelly and co apply themselves to the infectious Kimmel’s Jigs. Energy and fun are Munnelly’s stock in trade. This is a great album to lift the spirits, brimming with unselfconscious musicality, at times playfully exploring those jazz tinges that coloured the Irish music of the 20s and 30s (some cheeky soprano sax from Richie Buckley and banjo from Paul Kelly enhancing the effect on, for example, Munnelly’s own infectious barndance, the smileful By Heck). But let’s not give the impression that Munnelly is a one-trick pony. His original composition, the slow air “Ar Boithrin na Smaointe” finds him in soulful mood. A star-studded cast of friends lend their support. As well as the aforementioned Buckley (who also provides tenor sax) and Kelly (who also plays mandolin and fiddle), Munnelly is joined by brother Kieran (flute, bodhran), Daire Bracken (fiddle), Gavin Ralston (guitar), Ryan Molloy (piano), Lloyd Byrne (drums) and Joe Csibi (bass, double bass). His friends Helen Flaherty and Andrew Murray are invited along to sing, Flaherty giving us “The Garden Valley”, Murray turning his attention to Richard Thompson’s “The Dimming Of The Day” and “P Stands For Paddy”. Unpretentious, uplifiting music like this doesn’t come along every day. Hitch a ride on the Munnelly juggernaut and enjoy the journey!